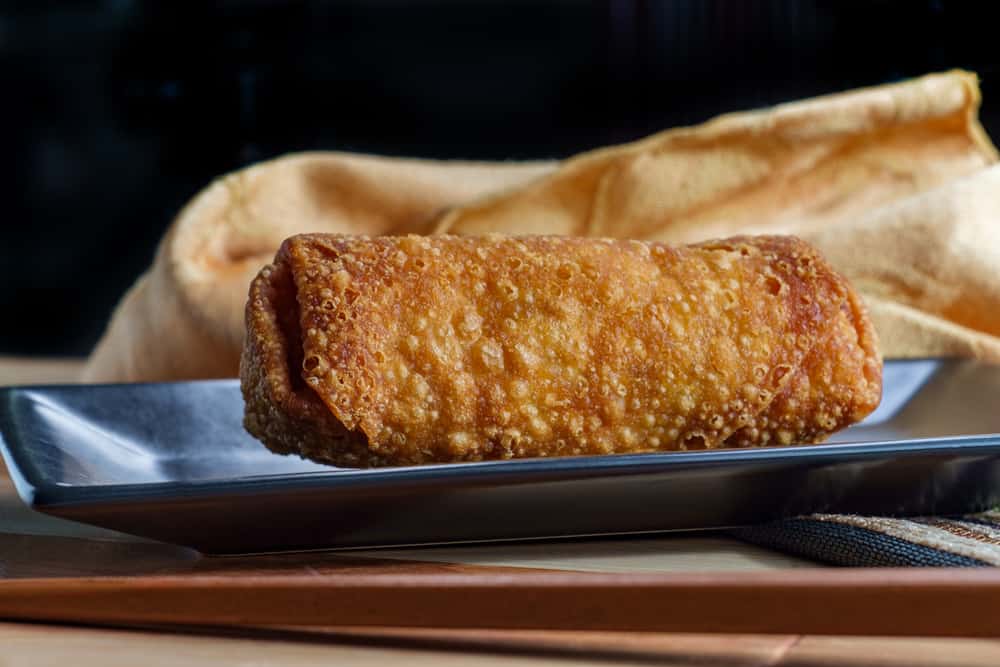 Although deep-fried snacks can be tempting, one that will not be making its way onto a vegan table anytime soon is egg roll wrappers. That’s right, this Asian-inspired snack is not vegan.

The clue might be in the title, but an egg isn’t the only culprit. Don’t despair as there could be vegan options, let’s take a closer look.

A lot of people get them confused, but these thick doughy wrappers are made differently from spring rolls. The primary ingredients are wheat flour and eggs.

The egg is the main culprit that means egg roll wrappers are not vegan. Roll wrappers can be made differently. These tend to be made from a simple recipe of wheat flour, water, oil, and salt. Of course, this results in a pastry without thickness due to the lack of egg.

Some vegan brands are making delicious alternatives, but more on that later.

We should also note that most of the fillings are also not vegan and are usually stuffed with pork. Also, egg roll wrappers are not to be confused with wonton wrappers. Despite being made from the same recipe, wonton wrappers are smaller and used to make wontons or dumplings.

One issue vegans face with fried food is that many restaurants will use the same oil to fry meat.

We always suggest asking how fried food is prepared, even if it is on the vegan menu.

Typical homemade recipes won’t differ much from large-scale production. With this in mind, here is how someone might make them to the original recipe, using egg.

A basic recipe may include the following ingredients:

The usual way of making egg roll wrappers starts by combining egg and water and salt before mixing the flour, about 1/4 of the cup at a time.

Then, a tablespoon of peanut oil is heated on a wok on medium before making 8-inch circles of the egg mixture. The wok is rotated to spread evenly and then reduce the heat to low, cooking for 45 -60 seconds. Once the edges start to curl, they can be removed from the heat.

Do Egg Roll Wrappers Have Egg In Them?

The clue is very much in the title, but yes, they do. This is what makes them not vegan.

It is because the poor treatment of egg-laying hens and the fact that they are bred for their reproductive systems makes it unethical. Any animal product is not vegan, and even free-range hen eggs are off the menu.

This is because they are often killed when their productivity decreases. They cost more to keep alive at this point.

It is difficult to find brands making egg roll wrappers without eggs, but not impossible. Let’s see the brands that are making vegan options.

What Brands Are Vegan?

Here is one brand making an option that vegans can enjoy. The basic ingredients of the egg rolls read as follows:

These are only going to be suitable if the filling is also vegan. Thankfully they are, with the ingredients list follows:

This, and the filling are almost identical to the Cohens Food version in how they are made, so we won’t list the ingredients again.

Your store-bought egg rolls will usually contain eggs, but two brands are making them differently. This makes home cooking in a hurry easier, but restaurants are still not there yet.

This isn’t to say that every food establishment will make non-vegan egg rolls, but it can often seem like the case.