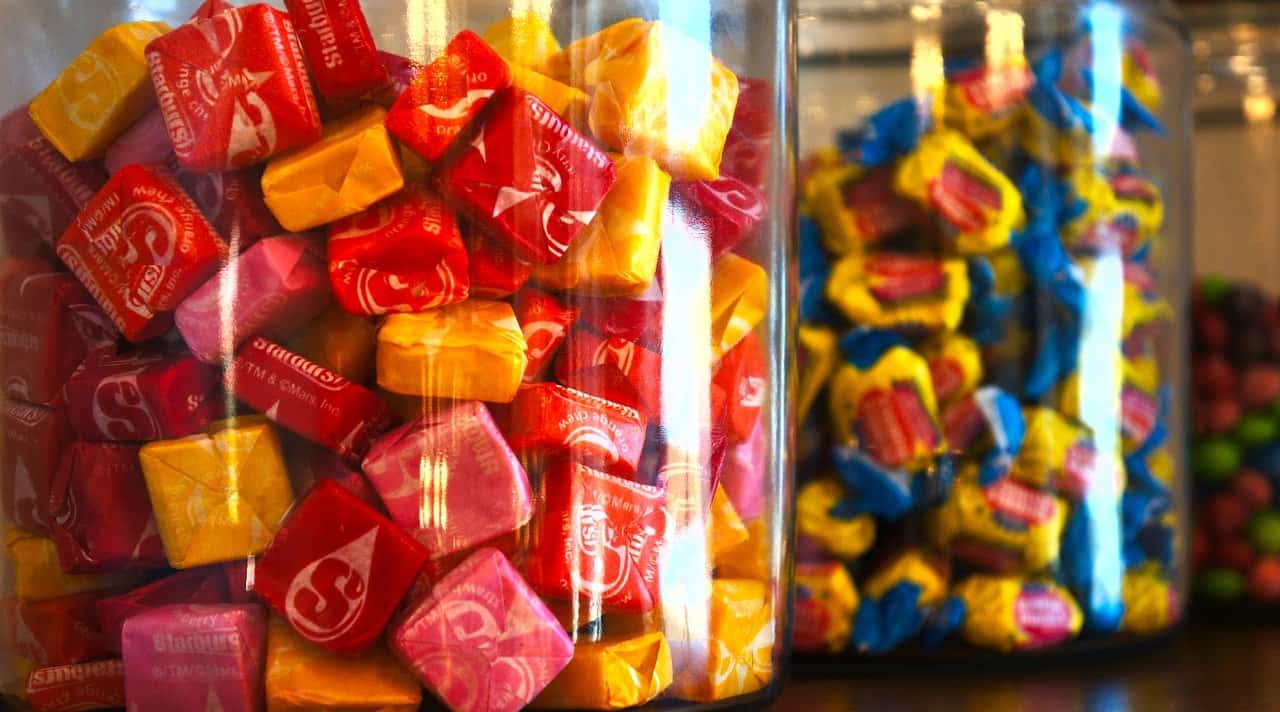 Chewy candies are often off the menu for plant-based diets, which begs the question, are starburst vegan? It’s complicated since the recipe differs by country. In general, though, the simple answer is that they are not.

There are tasty alternatives available. We are going to highlight the best options, as well as find out why Starburst is not vegan.

What Are Starburst Made Of?

Although the ingredients vary depending on where they are made, the following list is from the USA version:

There are a few ingredients that make them potentially non-vegan, but we are going to take a closer look at three in particular:

Gelatin is a protein derived from animal bones, skin, ligaments, and other animal parts. This can be from cows, chickens, pigs, and even fish. There is no flavor transferred to the food, but it does help give the sweets their chewy consistency.

Gelatin works as a bonding agent and can be found in various types of candy. It is made in a way that is cruel to animals, hence why any product that uses it is not vegan.

It should be noted that the UK version does not contain gelatin.

Not an ingredient that everyone knows a lot about, confectioner’s glaze is used to coat the outside of these sweets to give them their shiny appearance. Known as “shellac”, it is made from insects, their shiny coating nonetheless.

It is another ingredient that makes Starburst nonvegan.

These are often sourced from animals, namely crushed insects. As a vegan, this is not something you want in your food. It does beg the question as to why a non-vegan would want it in their food as well.

The artificial colors in Starburst are not derived from insects, but there are ethical questions. Many artificial colors are tested on animals to see if they are safe for humans. This makes them non-vegan unless proven otherwise.

Another controversial ingredient, and not every vegan agrees on it. Because palm oil is sourced in a way that harms the natural habitat of animals, it is considered to be non-vegan.

Many animals have found themselves endangered by the rise in demand for palm oil so vegans often choose to avoid it.

How Are Starburst Made?

We know that gelatin is included to give them their consistency whilst holding the little chews together, but how else are Starburst made?

Sugar is a contentious ingredient because of the potential use of bone char. This is what companies often use to ensure their sugar is white and is derived from animal bones, often from pigs and cows.

It is not clear if Starbust uses this method in their sugar refining process, but it does raise the question from a vegan perspective.

Does Starburst Have Gelatin?

The version made in the US does, making it non-vegan. The UK version does not, but it still contains white sugar, artificial colors, and palm fat.

Any gelatin content makes a product an instant no for any vegan, and that is before you take into account the other potentially unsuitable ingredients.

A vegan substitute to gelatin is Agar Agar. This is often used as a thickener in jello and can be made looser with the use of more water. Unfortunately, mainstream confectionery opts for cheaper alternatives such as gelatin.

Are All Starburst Non-Vegan?

Every Starburst variety made in the USA contains gelatin and will therefore be non-vegan.  We are referring to the following flavors:

Any other form of Starburst that follows a similar recipe such as minis can be counted as a non-vegan.

Some people will want to know if Starburst Jelly Beans are vegan. They contain confectioners glaze to enhance their shiny appearance, and therefore are not vegan.

When you want a sweet hit that is cruelty-free, this is a tasty vegan option.

These chews are also healthier, certified organic, and made in strawberry, cherry, and lemon flavors. Just like Starburst, they are individually wrapped but do not use ingredients as confectioners glaze for an ultra-shiny appearance.

There are no artificial colors or flavors to worry about, just natural flavors.

Because they use organic sugar, it cannot be processed using bone char. This removes one concern, but there is also no gelatin, palm oil, gluten-free, and certified vegan.

There isn’t even any corn syrup in sight making this a great vegan-friendly treat for kids especially.

Both non-GMO, gluten-free, and of course, vegan, the Wholesome Organic Fruit Chews are a hit with many following a plant-based diet.

There is no gelatin to be found, only naturally flavored treats that are available in cherry, strawberry, lemon, and orange.

Every vegan tends to internally roll their eyes at the sight of gelatin on the ingredients list, but it does make it easier to make a quick decision. To see gelatin removed from all food would be ideal, but it is down to the manufacturers to do the right thing.

Whilst Starburst is not vegan in the US, the UK version is far better suited, which does beg the question of why we cannot make ours to the same recipe this side of the pond. At least there are some tasty vegan alternatives to chew on.