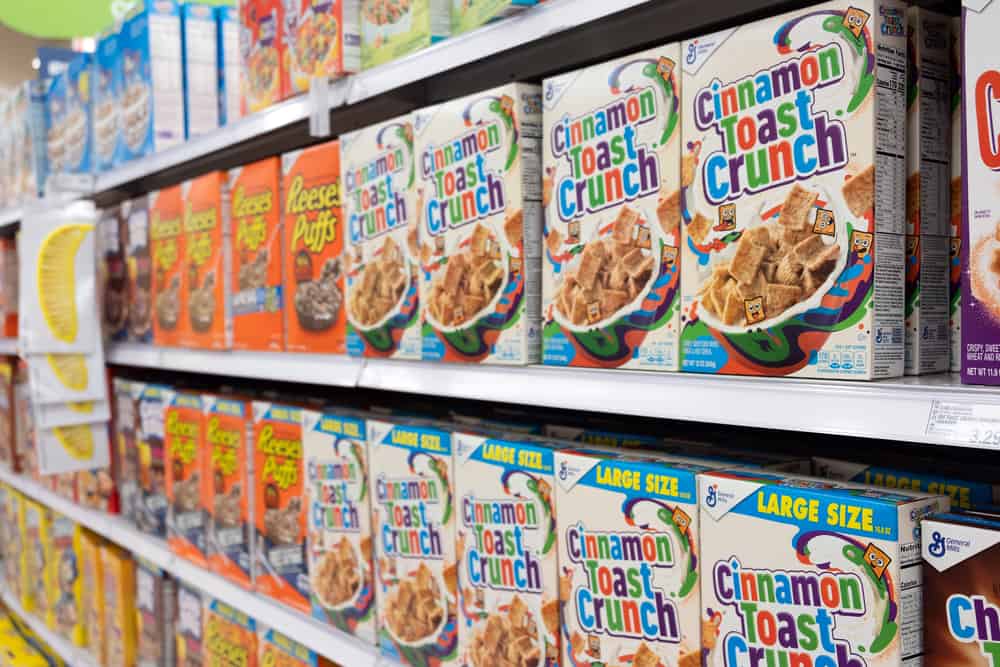 It seems like something we say a lot, but it is only because of one or two ingredients that Cinnamon Toast Crunch is not vegan. That’s right, the sweet, cinnamon treat is not suitable for a plant-based diet.

Brands are making delicious alternatives, and we will take a closer look at this brand, and what can be done to get that cinnamon fix.

Dairy is the first thing a lot of people look for in breakfast cereals, but this is a common misconception when you see the ingredients list here. Cinnamon Toast Crunch may contain real cinnamon, but it also contains Vitamin D3 and sugar. These are two red flags for vegans, although one seems worse than the other. For a full run down, the ingredients list reads as follows:

With many vitamins added to the cereal, it may be a tempting purchase for many looking for a fortified cereal. However, Vitamin D3 here ensures Cinnamon Toast Crunch is not vegan because it is sourced from lanolin. This is found in sheep’s wool and is therefore derived from animals.

As their wool production declines with age, many sheep are killed as they cost more to keep. This is part of the dark side of the industry that vegans will not tolerate.

It would be easy for the company behind the product. General Mills, uses a vegan-friendly version of D3 which is why it is a shame to see it in Cinnamon Toast Crunch.

Although it is difficult to say if this is 100% the D3 used in this product, it would be more likely that the label would say vegan friendly if this was the case.

Made in Albuquerque, New Mexico, General Mills starts by making large vats of a special dough. The combination of ingredients is pressed until flat and passed along a sheet where it is cut into tiny squares before moving through a toaster.

There was a case earlier in 2021 where music producer Jensen Karop allegedly found shrimp tails in his Cinnamon Toast Crunch. Yes, this would make them non-vegan, but it also seems difficult to determine which part of the process that this could have occurred.

Why is Cinnamon Toast Crunch Not vegan?

It is mainly because of the inclusion of vitamin D3, but also sugar. Because sugar processed in America is often used to decolorize using bone char to give it a desirable white appearance, it is difficult to say if many food items are truly vegan.

Even without D3, this would be questionable. Because bone char is made by the boiled bones of animals (usually cattle), it raises questions of ethics and would make any food non-vegan.

Still, it is difficult to determine which brands do use this method. Finding out whether a company uses bone char is tricky because they often use multiple suppliers.

Other versions of Cinnamon Toast Crunch include ingredients like Palm Oil, and should be avoided because of the environmental impact sourcing this ingredient can have,

Even if using dairy-free milk, Cinnamon Toast Crunch is not vegan. That D3 is not going anywhere if you change the milk up. Interestingly, it is often added to soy milk, so that’s another one to look out for!

Not using regular milk means there is no dairy to worry about, but D3 and sugar are the ingredients that make it non-vegan.

This is a product close to the real thing and although they do not claim to be vegan, we can’t see any animal-derived ingredients. Certified organic and non-GMO, there is a lot to like. The inclusion of cane sugar always raises a few questions, but there is no vitamin D3 in sight.

A full rundown of the ingredients reads as follows:

It may be an American classic, but sometimes things are not as wholesome as they seem. Cinnamon Toast Crunch is off the vegan breakfast menu, but there is an alternative available.

That pesky D3 is one to look out for in other cereals, as it may already be ruining what you think is a vegan breakfast.