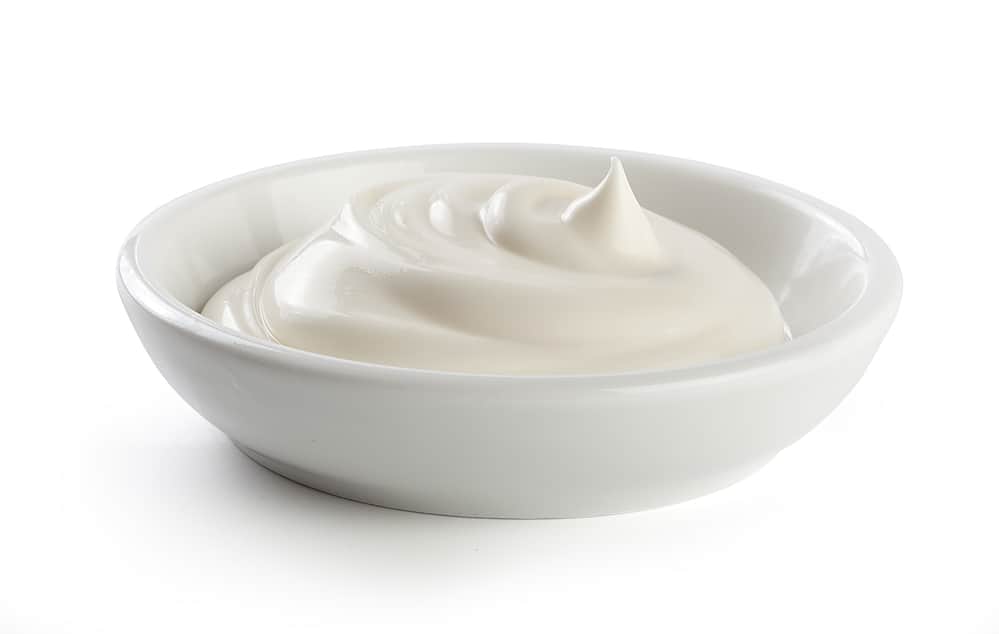 Launched as a cheap alternative to Mayonnaise, Miracle Whip might be affordable, but it is not vegan. A condiment popular inside a burger, Kraft Heinz Foods makes this product with egg, which is a problem for any vegan.

Anyone recently switching to a vegan lifestyle will find they have to give this product up. We are going to take a closer look at Miracle Whip, and see if there are any vegan alternatives.

What Is Miracle Whip Made Of?

There are two main versions, Original, and Light Miracle Whip. The recipes don’t differ a lot, but are made up of the following ingredients:

It is the inclusion of eggs that makes all of the above non-vegan. Because a vegan diet focuses on the wellbeing of animals, eggs are firmly off the menu.

Eggs are a contentious subject for some vegans, especially those who are new to the plant-based lifestyle. Eggs do not contain animal cells, but it is the way that hens are treated that is an issue.

Some are kept in cages where they can barely move, and all hens kept for their eggs are only alive so their reproductive system can be exploited.

How Is Miracle Whip Made?

Although it is a cheaper alternative to mayonnaise, it contains many of the same ingredients. The main difference lies in the added spices and sugar. Nutritionally, it is a toss-up between the lower calorie content in Miracle Whip, and the lower sugar content in Mayonnaise.

Because it is made up of less than 65% vegetable oil, it is considered a dressing and not mayonnaise. The ingredients are difficult to combine into the perfect consistency. This is the reason behind the name as when an engineer developed a machine that could blend it to the desired texture, it was called the Miracle Whip.

Does it Have Dairy?

Because it does not contain any animal milk products, Miracle Whip does not have dairy. Eggs are not categorized under the same blanket term.

Typical mayonnaise recipes do not contain dairy which makes them better suited to those who are lactose intolerant.

Still, it is irrelevant to a vegan as the egg content makes it unsuitable.

Does it Have Eggs?

This is the culprit that makes Miracle Whip non-vegan. The reason eggs are a no-go for vegans is just as much about the treatment of hens as it is the fact that they are derived from animals.

The conditions that hens are kept in are heinous, but it isn’t just when they are useful, laying eggs that are the issue. Many hens are killed after a few years once their egg production slows with age.

Because it costs farmers money to feed them, once they are less profitable, they are disposed of. Keeping animals and exploiting them is a major issue for any vegan, and anyone with a conscience.

Does it Have Sugar?

Yes, it does, and a lot of it. Mayonnaise is known for being tangy but Miracle Whip has a sweetness to it.

It gets this from the added sugar that amounts to around 1.58g per tablespoon of Miracle Whip.

From a vegan viewpoint, sugar can be problematic. It is not often known if the sugar has been combined with bone char. Derived from animals, it is used to color the sugar-white. Although traces are not found in the actual food, the process itself is an issue. So, sugar is another reason why many vegans would avoid Miracle Whip.

Is There A Vegan Version Of Miracle Whip?

There are some vegan-friendly versions of Miracle Whip that are made without eggs. The following are the pick of the tastiest:

100% plant-based and non-GMO, it is a popular product for dressings and spreading in sandwiches around the BBQ. They use simple ingredients such as avocado oil mayo to bring out a creamy texture that is close to the real thing, without the cruelty.

Another spread that is made without eggs, uses soybean oil to make it thick and creamy. There are no artificial flavors, just a handful of ingredients that are not chemical-based or difficult to pronounce.

One of the most popular vegan mayo alternatives, this is free from egg, gluten, and soy. Smooth and creamy, it is a great option for those who want to avoid the nasties and spread it on thick.

How To Make Vegan Miracle Whip

The easiest way to make sure there are no eggs is to make your own. With a bunch of recipes available online, we’re going to cover the basics.

The process of making it is super simple. Throw everything into a blender and combine for a minute. Then empty it into a bowl and stir for two minutes or until you have the ideal consistency.

Eggs can ruin a lot of things for vegans, and Miracle Whip is just the latest to add to the list. Still, there are tasty replacements, and saying no to companies that are cruel to animals is always a good thing.