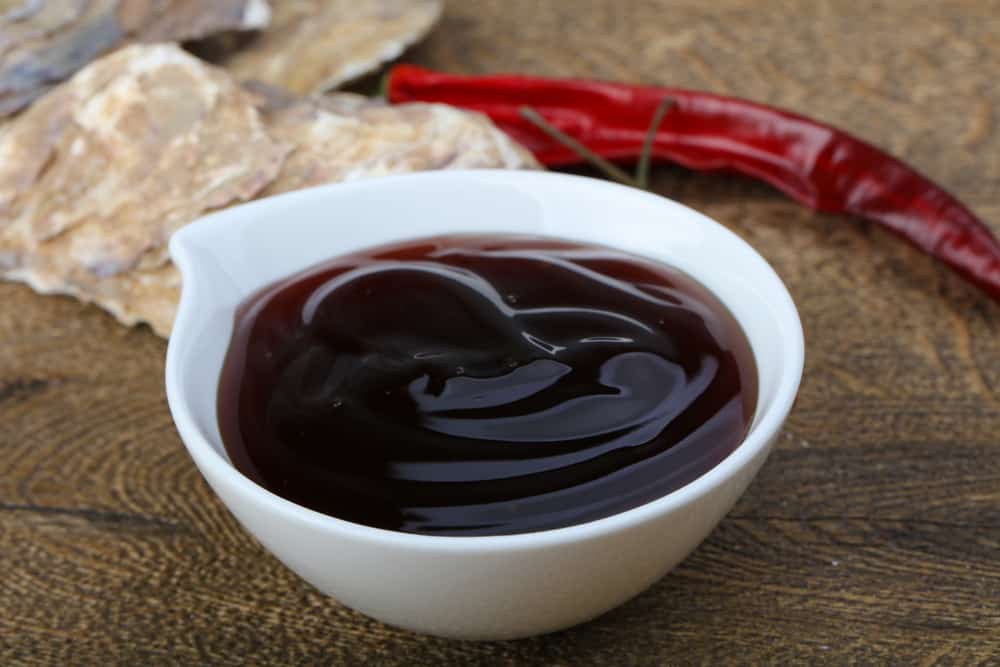 Although there are different versions on the supermarket shelves, it is not difficult to say if Oyster sauce is vegan. Typically, it is not. This popular Asian ingredient may be tricky to get onto your plate. Since the main ingredient is Oysters, it is not vegan, but some vegans are fine with consuming bivalves.

We’re going to consider this, and other aspects of Oyster sauce to see if it can be vegan, and explore the other options.

What Is Oyster Sauce Made Of?

One of the main ingredients is of course Oysters. These bivalve mollusks are what make them unsuitable for most vegans. Other ingredients include water, sugar, salt, and cornstarch. The latter is for thickening, which is a sign of a quality Oyster sauce.

To mask a low-quality bottle, many will use caramel coloring.

The modern vegan may consider eating oysters, and it is a topic of some debate. Because they are living organisms, most vegans will not consider eating them. Some people argue that oysters do not feel pain because of their rudimentary nervous system.

Other factors such as not having sensory receptors or displaying protective motor reactions as a defense mechanism are often recited.

Since PETA has confirmed that oysters are a part of the animal kingdom, it should put the argument to rest. They are closely related to clams and scallops than any plant, after all.

There are different reasons why vegans choose a plant-based diet. Some concern themselves with the ethical treatment of animals, whilst others are more concerned with the health benefits.

We’re not here to debate whether a vegan should be flexible or not. This is why we deem oyster sauce as non-vegan.

How Is Oyster Sauce Made?

The traditional method is to simmer Oysters in boiling water to caramelize their juices. This is collected once it thickens and darkens, becoming closer to the sauce that is used in Asian cuisine. At this point, the sauce becomes rich and flavorsome.

Because this is an expensive method, other ingredients are added. Salt is one of them. Some brands will use oyster essence which is artificially made and can be vegan friendly in some cases.

Nowadays, manufacturers try to lessen the time it takes to extract the juices and others will include the likes of MSG. This is another reason why it is important to always study the label.

Some companies will even add soy sauce to make it thicker. Although soy sauce is often vegan, this still doesn’t detract from the oysters.

There isn’t a product marketed as a vegan oyster sauce but we have found some products that come close. A vegan “fish” sauce may well be the next best thing, but there are also soy sauce and Worcestershire sauces to consider.

Soy Sauce is preferable since it is close to Oyster sauce, containing many of the same ingredients, just not the Oysters. Here are some of the more popular options, although it is still best to check the label no matter what alternative you are considering.

This is the closest vegan alternative to oyster sauce in terms of texture and flavor. A common sight in Asian grocery stores, it is a good idea to try different versions since some taste stronger than others.

Otherwise known as “shiitake soy sauce” it is not difficult to find but always check the label just in case. Haday is a popular brand making dark mushroom soy sauce that is vegan.

Another alternative to Oyster sauce if made the right way. Stay clear of traditional Worcestershire sauces since many will contain fish such as anchovies to bring out the salty flavor.

For a plant-based alternative that is also certified organic, try Annie’s Organic Vegan Worcestershire Sauce (https://www.amazon.co.uk/Annies-Organic-Worcestershire-Sauce-6-25/dp/B0058NJA8C). Many vegans will like it because it is not only free from anchovies but synthetic colors, preservatives, and artificial flavors.

Of course, the best way to replace any nonvegan condiment is to make it to your preference. There are recipes for a vegan oyster sauce that uses dried shiitake mushrooms as part of the recipe.

Mostly consisting of soya beans, hoisin sauce is a usually vegan condiment. There are also a variety of spices and vinegar included to give it a bit of a kick. These ingredients are what make it less of a match in terms of flavor than the mushroom-based alternatives.

So, the debate around Oysters may continue in some circles, but for most vegans, they are what makes Oyster sauce non-vegan.

With some vegan-friendly alternatives available, you don’t have to go without completely, you just won’t get the real thing.