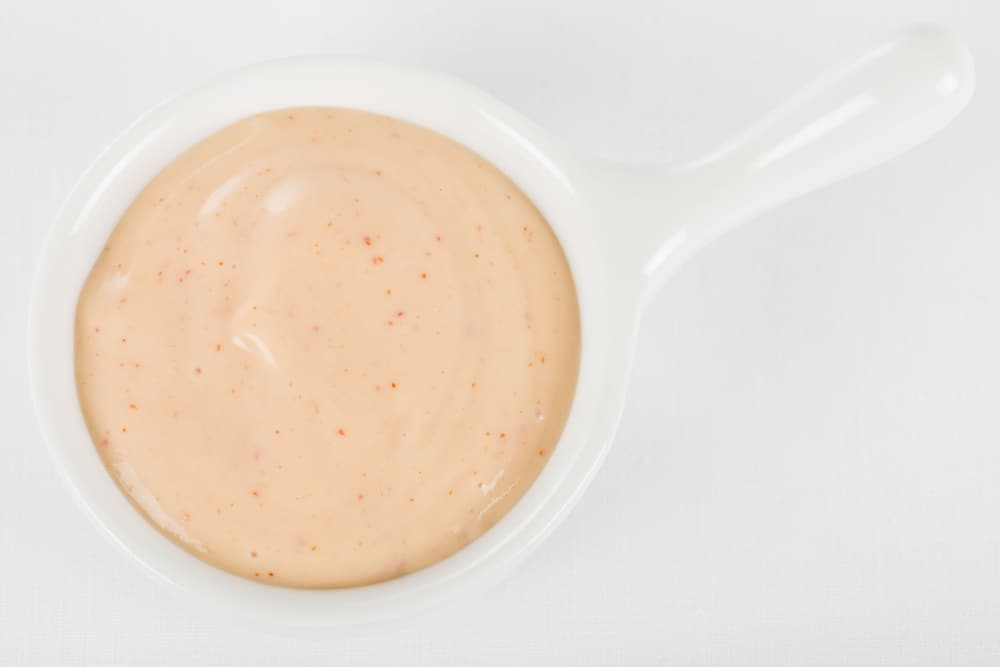 A delicious sauce that differs depending on where you find it, yum yum sauce is not typically vegan, but it can be made to be. This is only if it is made without certain ingredients.

We’re going to look at what goes into it, and make sure the yum yum sauce you dip in that vegan alternative to steak and shrimp is fine to consume.

What Is Yum Yum Sauce Made Of?

Many people think this American invention has Japanese origins, but it does not. The typical yum yum sauce recipe contains a combination of the following ingredients:

You may have guessed already, but it is the inclusion of Mayonnaise that ensures it is not vegan. Because Mayonnaise contains egg yolks it is not suitable for a plant-based diet.

The other ingredients are fine, but even sugar can be unsuitable depending on how it is made. Some sugar is made with animal bones. There are three main types, sugar, beet sugar, and coconut.

A lot of sugar will be made a brighter whiter using bone char. This is made from cattle bones, often from other countries, and sold to the US to use in this way. Although there isn’t any trace of bone char in the sugar when consumed, it is still unethical in many people’s eyes.

It can be difficult to tell if sugar is made in this way, which is why using beet sugar is a good alternative to ensure it is vegan.

Does it Contain Dairy?

Yes, it is. Although it does contain eggs, it is usually made without milk or other products from mammals, yum yum sauce does not contain dairy.

It is a common question because of its creamy consistency but since mayonnaise does not contain dairy, and the other non-dry ingredient is water, it is easy to answer. This still doesn’t make yum yum sauce vegan because of the egg, but it does not usually contain dairy.

Does it Contain Egg?

Yes, it does. Because of the mayonnaise used in most recipes, yum yum sauce contains egg yolks. This is a big no for any vegan because they are animal-derived, but that’s not the only reason.

The treatment of hens on egg-producing farms is cruel, and they are only kept alive so their reproductive systems can be used. This raises all manner of ethical questions which is why no vegan can eat eggs in good conscience.

Not only this but when hens get older, they are often killed as their egg-producing numbers decline. Although this occurs naturally with age, they are still disposed of.

Even eggs from hens that are kept in better conditions are not on the menu because of this. Some vegans think that it is ok to eat eggs based on the fact that they are not fertilized and therefore there are no living cells. However, there is still the question of ethics.

Does it Contain Soy?

It depends on the recipe, but for example, Tom Ho’s Yum Yum Sauce contains Soybean Oil and egg yolk.

It very much depends on the brand and if it is homemade. Most of the recipes online will not suggest using soy sauce. Although this shouldn’t be a problem for most vegans as soy sauce is made from fermented soybeans as well as a handful of other ingredients that aren’t usually unsuitable.

Does it Contain Shrimp?

This is a common misconception, most likely because yum yum sauce is popular for dipping shrimp in. It might also be because it is sometimes called shrimp sauce.

The truth is, yum yum sauce does not contain shrimp. This is good from a vegan point of view as it is easier to replace fewer non-vegan flavors, and there is already mayonnaise in the recipe.

For the record, yum yum sauce is also a popular condiment for eating steak but does not contain any meat-based ingredients either.

Does it Contain Mayo?

Yes, it does, and this is why it is not vegan. The inclusion of mayo means there is egg, more specifically, egg yolk. Some vegans can look past this, but a true plant-based diet will not cater to mayonnaise.

It does make it a quick fix for a homemade recipe since there are vegan mayonnaise brands available. Still, most yum yum sauce is not vegan because of the mayonnaise.

It is the staple ingredient that gives the sauce its creamy consistency and texture, but the way it is sourced raises multiple questions of ethics.

Does it Contain Shellfish?

Again, a common misconception here, and all because of how it is eaten by most people. It is a common sight on a table in a shellfish restaurant but yum yum sauce does not contain shellfish.

You might see people using it to flavor their meal in a fish restaurant, but there is nothing in the recipe that is made from shellfish.

This is good news for people with certain allergies, but it still does matter to a vegan because of mayonnaise.

How Is Yum Yum Sauce Made?

Homemade yum yum sauce is usually made by combining a few scoops of mayonnaise with all the other ingredients and mixing until you have the desired consistency.

Then, it is refrigerated for at least an hour, but the longer it is in there, the better the flavors combine.

There are ways to make yum yum sauce vegan, which is good since the usual recipe is not suitable for a plant-based lifestyle.

Make a homemade recipe using most of the same ingredients, replacing the mayo with a vegan alternative and you can enjoy the same popular sauce at your table.