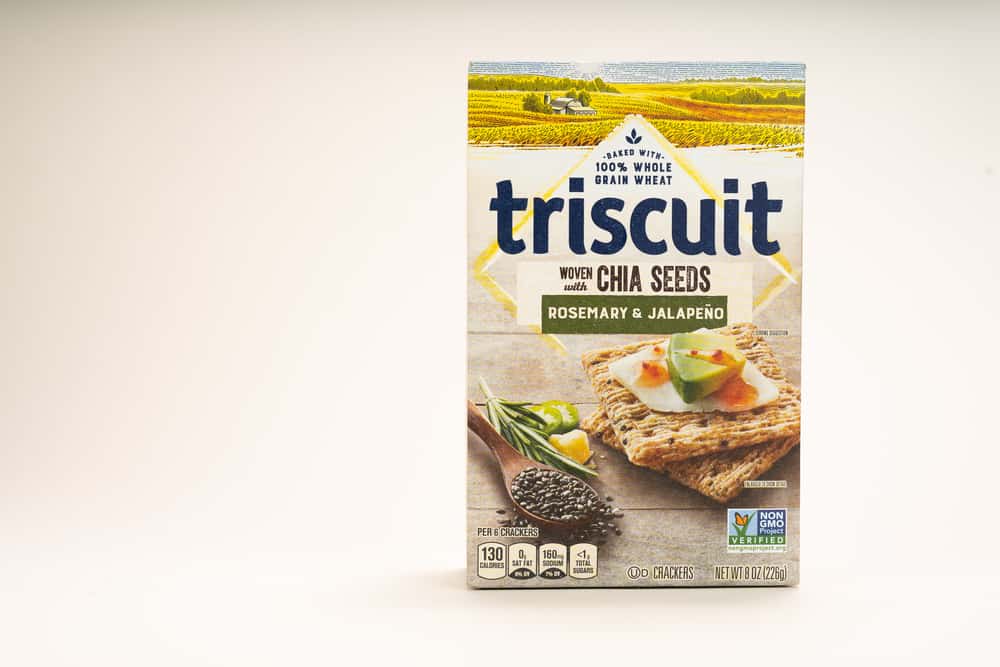 With a variety of flavors to choose from, many vegans would love Triscuits to be vegan. So, are they? The answer is yes, but not all flavors. With no dairy or animal-based ingredients to be found, some can be enjoyed by anyone following a plant-based diet.

We’re going to take a look at the vegan flavors of this Nabisco-made snack. Then, we will answer some other common questions about these baked whole wheat wafers.

Having been around for over a hundred years, Triscuit has far outdated the modern vegan scene. Interestingly, this popular snack hasn’t changed much, aside from offering a wider selection of flavors.

A closer look at the original flavor and we can see why they are a go-to vegan option for many.

Essentially, they are made from wheat, oil, as well as salt, and pepper. This is good news to any vegan who wants a savory snack between meals.

Triscuits are made by cooking wheat in water until it is made up of around 50% moisture. Then, to let the moisture distribute evenly, they are tempered.

They are made into shredded wheat via slotted rollers that separate them into thin web-like pieces. To make an individual cracker, multiple webs are stacked before being shaped into 1.75-inch squares.

They are baked to remove all but 5% of the moisture, and that is how you have your Triscuits.

Plant-based snacks aren’t always so easy to find, so it is good to know that most of the Triscuit flavors are vegan.

Here is a list of the flavors that are plant-based:

The simple recipes of each flavor follow the lead of the founder Henry D. Perky who created the snack in 1900. It remained a plain recipe made of shredded wheat until oil and salt were added in 1935.

This is what the current recipe is built upon and as the original flavor suggests, it is very similar. There is no trace of butter, milk, meat, or eggs, making them vegan.

The vegan options happen to be the most flavorful. Some of the ingredients used to flavor the vegan options include dried carrots, garlic powder, onion powder, paprika extract, and dried sweet potato.

As a vegan, finding healthy snacks isn’t always easy. This is why Triscuits are a great option. The health benefits include high fiber which has been linked to decreasing the risk of heart disease, certain cancers, and diabetes. The whole grains are also good for keeping you feeling full for longer.

The above flavors can be enjoyed by a vegan in different ways. Eating them as they come out of the packet is fine, but other exciting ways to eat Triscuits include mixing them with nuts, serving them over soup, breaking them over a salad for a different texture, and sprinkling crushed handfuls over vegetables.

Are All Triscuits Vegan?

Having this many vegan options from one brand is impressive. Still, there are some flavors to keep an eye out for as they contain ingredients not compatible with a vegan lifestyle. Some are not so surprising, but here they are:

The cheese flavors make them easily distinguished from the vegan options. The ingredients in these flavors include enzyme-modified cheese made up of different types of cheese, as well as modified milk ingredients.

The dairy products are not suitable for a vegan because of the way dairy cars are treated during milk production. There is also the forced impregnation of cows, and the use of steroids that makes it unethical and cruel.

The non-vegan options may contain additives that are derived from fish, namely disodium guanylate and disodium inosinate.

Finding brands of vegan crackers that are reliably vegan and available in stores is an uphill struggle for many. But when you see Triscuits in the snack aisle, you can pick up a box of one of the 8 vegan flavors and know you can enjoy them.