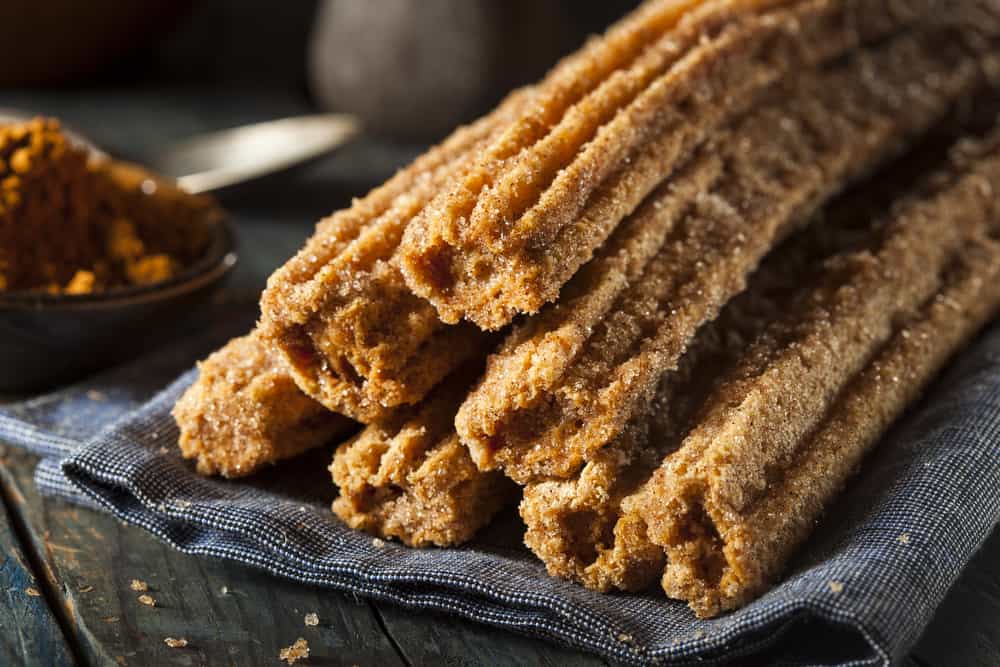 Available from so many outlets, it is important to know the ingredients to determine whether or not churros are vegan. The fresh way of making them involves the use of eggs and milk, so they are not typically vegan.

Still, not every establishment uses this recipe so we are going to take a closer look, and see where a vegan may be able to enjoy this fried desert.

What Are Churros Made Of?

Vegans wishing to enjoy churros will find the dough to be an issue. This is often made fresh with milk, sometimes fried in butter, and can even contain egg.

Churros use choux dough which is problematic for a plant-based diet. The pastry may be light, but it is made with water, flour, and crucially, butter and eggs. Popular in Spanish-speaking countries, dough is not the only issue for a vegan.

In Mexico and a variety of South American countries, churros can be made with a filling. This can be vegan if it is a fruit, but will often be a bar of non-vegan chocolate or similar.

The sauce will probably contain milk and double cream, and chocolate that is rarely vegan. So, are fresh churros vegan? It is highly unlikely.

There are ways to make Churros that would be vegan friendly, so the highly processed versions might not be so unappealing.

How Are Churros Made?

Making churros is simple, but the use of dairy is an instant red flag for a vegan.

Fresh churros are made by creating the dough that becomes the churro before deep frying each one. Different stages include combining the dry ingredients before frying, making the cinnamon sugar to roll them in after, plus making the chocolate sauce.

Each of these can be made vegan, and there are plenty of establishments that make them in a way that can be enjoyed with a plant-based diet.

To make churros vegan friendly, the recipe has to take out the dairy. For some, these aren’t real churros but if you can get past the snobbery, there are options for vegans.

Using oil, sugar, water, all-purpose flour, and cinnamon to make the churros is one way of removing the dairy. For the sauce, a lot of people use coconut cream and melt vegan-friendly chocolate.

Some establishments make their churros to a similar recipe. So let’s see which are making vegan-friendly churros.

Because of the potential milk and egg content in the flour, fresh churros are not vegan. A lot of the time, it is the filling that is the issue. In Brazil, you may find dulce de leche as an option. This is made with sweetened milk, slowly heated to give it a caramel-like flavor. Again, not vegan.

There are other toppings to be wary of and these include champurrado. Typically served in Mexico, it is also known as atole, and is usually made with milk.

For the most part, Costco churros are not vegan. This is because they contain milk, butter, and eggs. This might be good news for churros purists, but it disqualifies them from being vegan.

The Costco ingredients list for churros is as follows:

They prepare them fresh in-store, preheating them to give them the crispy texture that is so popular.

Because of the milk content in their dough, El Pollo Loco Churros are not vegan. If you discount all the meat options on their menu, there are plenty of meals to choose from as a vegan, just not churros.

Interestingly, the corn and flour tortillas are both vegan, but you just can’t have the cinnamon sugar dessert.

They are not. Dominos make churros for the New Zealand and Australian market, but according to their website, they use egg and milk to make them.

The chocolate dipping sauce is also not vegan since it contains milk. Dominos are starting to increase the vegan side of their menu, but are slow on the uptake so anyone wanting vegan churros will have to look elsewhere.

The closest thing on the menu is the Taco Bell Cinnamon Sticks, and these are vegan. They are made with the following ingredients, all of which are vegan:

Again, these may not be strictly the same as regular churros but they are close to the real thing. Although they contain processed ingredients, they are vegan.

We should note that in the UK, Taco Bell sells regular churros, but use a different recipe. Unfortunately, they use milk meaning they are not vegan.

This is a contentious one for some because of the vitamin D3 included in the recipe. It is derived from lanolin oil (wool oil) which means it is avoided by many vegans.

Because it is not mentioned in the ingredients list, instead of on the nutrition panel, it is hard to be certain, but most people would deem this as a likely ingredient.

It’s not easy for every vegan to avoid lanolin oil but since vegan D3 is derived from lichen (and not as mainstream just yet) it has to be said that Cinnamon Toast Crunch Churros are not vegan.

Whilst the crunchy on the outside, soft on the inside snack is a tempting treat for many, most versions are not vegan.

The more natural the churros recipe, the more likely it is to contain dairy. There are a handful of options though. The best is to make vegan churros for yourself. There are plenty of excellent recipes online and since the cinnamon and sugar combination is the best part of churros, a vegan doesn’t have to miss out.