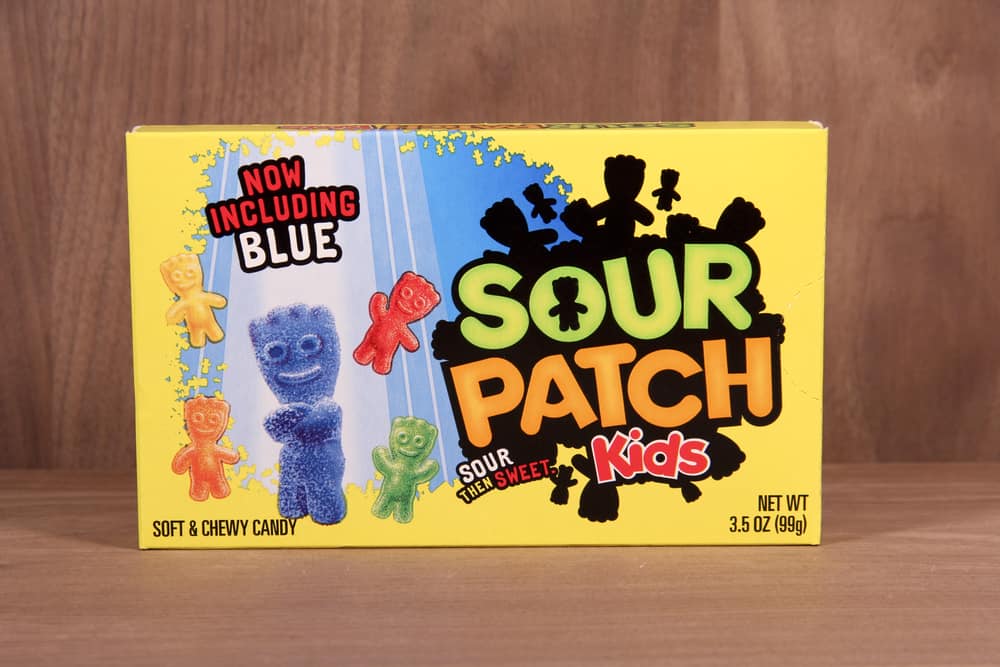 A sour treat may be fun, but how suitable is one of the most popular for a plant-based diet? Since many sour candies contain gelatin, it is only right to ask are Sour Patch Kids vegan? We are going to take a closer look to see if a vegan could wince over the sourness.

What Are Sour Patch Kids Made Of?

Upon closer inspection, it appears that the recipe has changed over the years. According to the Sour Patch Kids website, the ingredient profile is as follows:

This is different from the UK version, made by Maynards, which uses Gelain in the ingredient profile. This makes it non-vegan, so be mindful about where the Sour Patch Kids come from. Be prudent and check before purchasing.

Some of the controversial ingredients that will raise an eyebrow for many vegans include sugar. Because it is unclear as to how it is processed, there is always a risk that the company uses bone char to give it a white appearance.

This does not filter into the food itself, but it does call into question the vegan-friendly properties. Many assume that unless it is mentioned otherwise, sugar in sweets is not made in this way.

Mondelez International, the company that makes Sour Patch Kids has said that some of its suppliers use bone char. This isn’t specific enough to say that they do use it when making Sour Patch Kids, but it is a concern.

Other ingredients to be mindful of include natural and artificial flavorings. Typically, confectionary companies will highlight when natural flavors are derived from animal sources. Most of the time, they are from plant sources.

How Are Sour Patch Kids Made?

The manufacturing process and testing are where the natural and artificial colors are questionable. Because some colors are tested on animals, many vegans choose not to consume these types of products.

This is an assumption and not every food color will be made this way. Certain types such as Carmine get the color itself from an insect or animal but that is usually listed as an ingredient (which it is not here).

Incidentally, the sour taste is created by the combination of the mouth’s saliva, reacting with tartaric acid and citric acid.

Then there is the issue of sugar again. Instead of using bone char, some companies use granular carbon. This is a way of filtering sugar without the use of animal products. The problem is, this information is not so readily available, making it difficult to know for sure.

Because Mondelez has confirmed the use of bone char in some of their products, we cannot say that Sour Patch Kids are vegan.

We can only assume how Sour Patch Kids are made based on the ingredient profile. Where gelatin is not present, the gummy texture is likely to be the result of corn syrup and cornstarch. So, the non-UK variant of Sour Patch Kids will use these two to bond their ingredients.

The UK version uses gelatin, making them non-vegan. Gelatin is made by boiling animal parts such as bones, ligaments, and skin among others. It is a controversial ingredient for many reasons since some people say there could be trace elements of it in Sour Patch Kids. This is because there are no gelling agents listed on the ingredients.

Think of the consistency of marshmallows, jellies, and other chewy candies. They often get their texture from the use of gelatin.

Other Sour Sweets That Are Vegan

There are too many grey areas with Sour Patch Kids to say if they are vegan, and the UK recipe is not.

Because of this, we believe the following options offer a better alternative. These are also sold as vegan-friendly, which helps to put the mind at rest.

These are their organic sour beans, made with organic cane sugar among other organic ingredients. They are labeled as vegan, gluten-free, and non-GMO. Even their colors are made from concentrated ingredients such as carrot, blueberry, radish, and apple. Nothing artificial to worry about.

For many following a vegan lifestyle, these are the go-to sour sweets based on their transparency, and they do make it easier for vegans to enjoy a sour snack without having to worry about how they are made.

Another plant-based product, these aren’t strictly sour but do have a sweet taste without the use of animal-based ingredients.

They are sweetened without sugar alcohols, using allulose instead. This is derived from raisins and figs and although it acts like sugar, sweetening this snack, it does not act like it.

These sour gummies may not have the same texture as Sour Patch Kids, but they do have the power to make the consumer wince at the sourness. This is all done without the use of animal products, making them vegan.

Without the clear message that they do not use bone char, then it has to be said that Sour Patch Kids are not vegan. Also, the lack of clarity surrounding the testing of their natural and artificial colors is questionable.

For those who can see past the above, avoid the UK version as they use gelatin. Luckily, there are vegan alternatives to provide that chewy, sour hit.