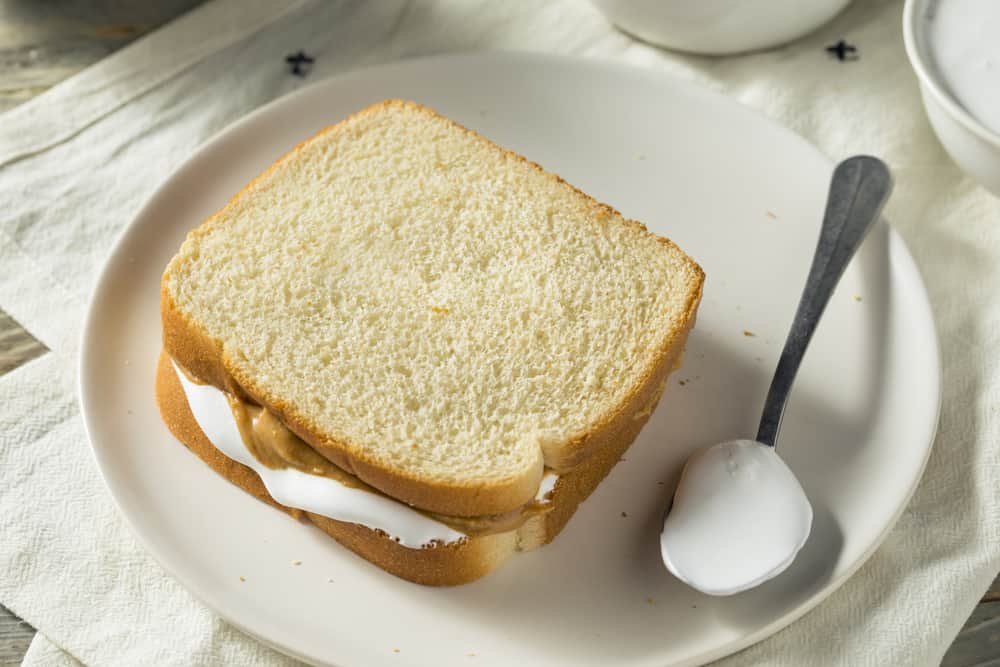 It may be a popular snack that many people find any excuse to eat, but is Marshmallow fluff vegan? Unfortunately for anyone who has tried it before but is now following a plant-based lifestyle, it is not vegan.

We’re going to look at why this is, and see if there are any alternatives so you can enjoy a cruelty-free version for yourself.

What Is Marshmallow Fluff Made Of?

The sticky spread recipe with New England origins doesn’t contain many ingredients, but it does have more than one that a vegan will wish to avoid. The first is cream in homemade recipes. This isn’t always included, but if it is, dairy is present, and the second is egg whites.

Durkee, the original Marshmallow Fluff brand, uses pretty much the same recipe it has for decades. Other ingredients that are often included are sugar, corn syrup, cream of tartar, vanilla extract, and water.

It gets its fluffy texture by using egg whites. This makes it non-vegan due to the cruel conditions that hens are kept, as well as other ethical reasons.

Hens are used for their reproductive system, and when this starts to slow with age, so does their egg production. A lot of the time, they will be killed by farms where keeping them alive costs more than they are worth.

Conscious brands making plant-based marshmallow fluff will follow a different recipe, often using vegan marshmallow creme to make it suitable. It’s good to know that we’re not all out of options.

Does it Contain Gelatin?

Although marshmallows do contain gelatin, marshmallow fluff does not. Gelatin is typically used to give a chewy yet consistent texture, but because of the egg whites that make this recipe fluffy, there is no need for it.

Does it Contain Pork?

It does not. There are no pork-derived ingredients in Marshmallow fluff. This might not always be the case for marshmallows, but it is not the same for the spread.

Most people are concerned about gelatin from this perspective, but since it does not have any, there is nothing to worry about from this point of view. Always be sure to check the label as companies do change their recipes.

How Is Marshmallow Fluff Made?

Made with egg whites to get their consistency, they are beaten until fluffy. Then, hot sugar syrup is poured into the mix and is combined with care until the desired consistency is achieved.

A lot of people think it is just made from marshmallows, but this is not the case. The main brands keep their production method close to their chest, with the whipping time a secret.

It isn’t the easiest product to source as a vegan, but some brands are making it possible to enjoy this sugary treat without animal-derived ingredients.

The best way to make them is by using vegan marshmallows. Dandies (https://dandies.com/recipes/vegan-marshmallow-fluff) is a brand that makes gelatin-free marshmallows that do not contain dairy, eggs, or fish.

The closest brand to it that is making a commercial option is Smuckers, and we will take a closer look at their ingredient profile a little later.

Other brands making vegan marshmallows to use in a homemade recipe include Trader Joe’s, Ananda Foods, and Smuckers.

Because of the inclusion of egg whites, it is not. Their ingredient profile reads as follows:

The dried egg whites are the issue once again, but also the inclusion of sugar raises questions about their potential use of bone char. This is an ingredient used to color sugar and make it whiter. Derived from cattle bones and purchased from abroad, there may be no trace of it in the sugar, but it raises questions of ethics to any vegan.

It is a tricky ingredient in some ways since most companies do not disclose the type of sugar they use and whether or not it has been combined with bone char at any point.

Their ice cream topping is surprisingly vegan. The following ingredients are used in the recipe:

It even gets the seal of approval from PETA. The inclusion of sugar hasn’t put them off so this sweet and creamy treat can be enjoyed on ice cream or any other way you choose.

Mix the cream of tartar and aquafaba until you get a fluffy texture.

Add 10 oz of vegan marshmallows to water and microwave in short 20 second bursts, mixing until they have melted. Then, combine all ingredients and mix until smooth.

Whilst marshmallow fluff is not vegan, it is easy to make your plant-based alternative. The likes of Smuckers show that companies are getting close to making it happen which is encouraging.

It might be low on some brands’ priority list now, but we can see a future with a vegan Marshmallow Fluff in stores.