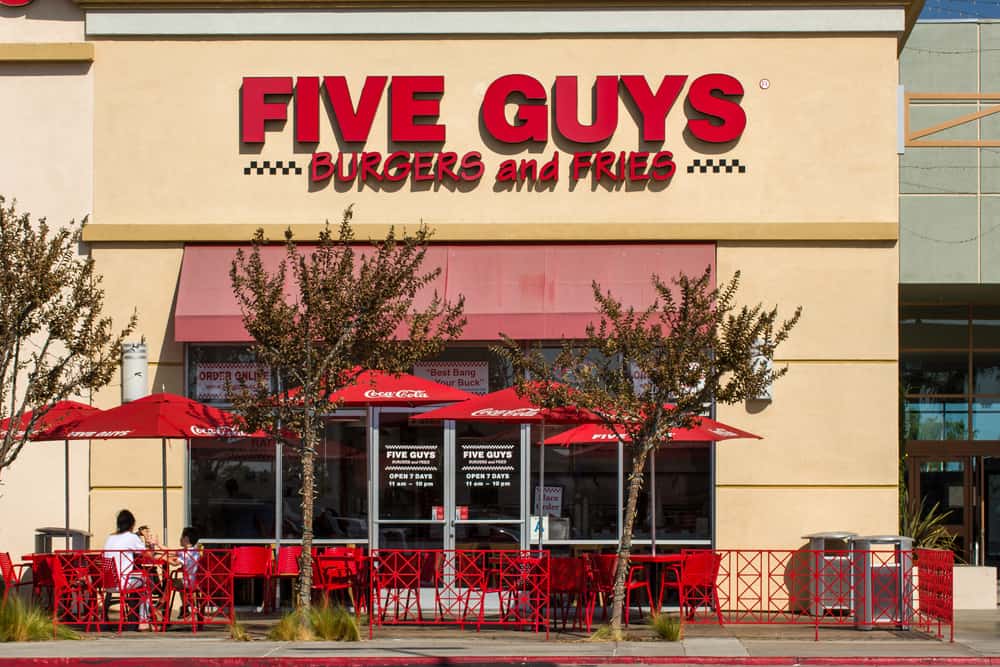 When you want to sink your teeth into a bunch of Five Guys food, the fries are going to be the obvious go-to. But, is this all-American fast food restaurant one of the few that offers vegan-friendly fries?

Yes, Five Guys french fries are perfectly vegan-friendly. If you’re curious about this issue, we’re going to discuss it at length in this guide. Let’s talk about the vegan foods that you can order, as well as the non-vegan items on the menu.

What Are Five Guys Fries Made Of?

As far as ingredients go, Five Guys fries are incredibly clean. They only have two ingredients: peanut oil and potatoes. You can get salt with them. Since they are so simple to make, you can eat them without any concerns about veganism.

What Do They Fry The Fries In?

Five Guys fries everything in peanut oil, instead of lard or beef fat like other fast food chains would consider using. This means that the oil in your fries here is totally vegetable-based, so both vegans and vegetarians can enjoy it.

Are The Fries Cooked In Peanut Oil?

Yep. Ever since the inception of the company’s first fast food store, Five Guys was proud to offer stuff fried up in peanut oil. It’s one of the main parts of their brand. While it’s great that there is a strong emphasis on plant-based oils, there is still one issue that you may have with this decision…

Are The Fries Dairy-Free?

Since no milk products were used in the making of their fries, Five Guys fries are all dairy-free.

Are The Fries Gluten-Free?

Yep. No gluten or wheat products are used in the Five Guys fries recipes. This means that they are, by default, gluten-free.

The herbal seasoning used in Five Guys Cajun Fries includes salt, onion, garlic, white pepper, red pepper, and a dash of oregano. All of the herbs involved in the seasoning are vegan, so you can also rest assured that it’s vegan as well.

This is a bit of a different issue altogether. Unfortunately, the fries are one of the only things on the menu that is fully vegan-friendly. The Five Guys Veggie Sandwich has onions, mushrooms, peppers, lettuce, and tomatoes. All of those are vegan-friendly, but there’s a catch.

The bun that comes with it is not vegan, since it contains both milk and eggs. So, you can eat the stuffing, but not the bun.

Are The Buns Vegan?

Unfortunately, this is one chain that sticks to traditional ingredients when it comes to bread. Since they contain eggs and milk, they’re not vegan.

Is The BBQ Sauce Vegan?

Yes! If you are looking for a sauce to dunk your fries into, Five Guys has you covered. Many of their top sauces are excellent for vegans, and that includes their famous BBQ sauce.

What Other Sauces Are Vegan?

Five Guys sauces are pretty vegan-friendly for the most part. The vegan options here include:

Most things on the Five Guys menu are not vegan-friendly, either due to the use of meat or the inclusion of eggs. This means that many menu items will have to be avoided. This includes:

Five Guys Burgers And Fries is the kind of restaurant chain that really, truly lives the burger life. Unfortunately, that tends to mean that they are not quite the best choice as far as vegan food goes. While they are great for using peanut oil instead of lard, the truth is that strict vegans will feel like a fish out of water here.

Yes, Five Guys makes vegan fries, but that doesn’t mean it’s particularly vegan-friendly. While you might be able to get fries, everything else is not really vegan-friendly. If you’re vegan and want to try this restaurant, be cautious.