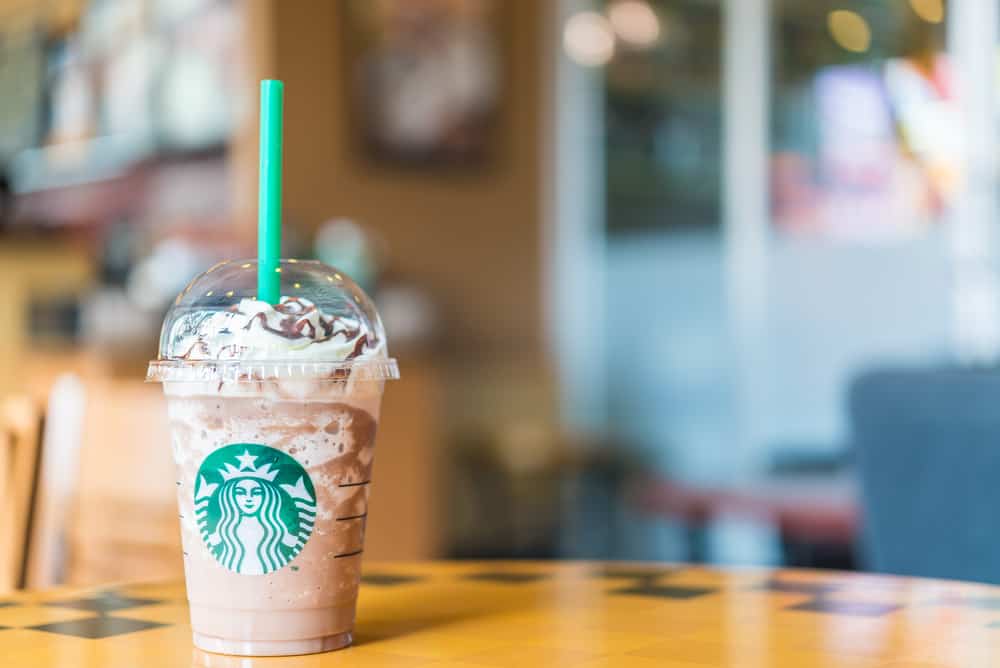 Coffee makers around the world are waking up and adding to their vegan range. Starbucks knows how to make a tempting drink, but for those following a plant-based diet, it can be a tricky business. Specifically, many people want to know are Starbucks Frappuccinos vegan? Although it never used to be the case, we can reveal that they are.

We’re not talking about the traditional version though. Read on to find out how you can make sure your next Starbucks Frappuccino is vegan.

Also, be sure to read our complete guide to vegan options at Starbucks.

What Are Starbucks Frappuccinos Made Of?

The cold refreshing coffee consists of a few key ingredients, with milk being the main concern to a vegan.

A blended beverage, they are available in a variety of flavors when made in-store with the pumpkin spiced, caramel, java chip, and white chocolate mocha being some of the favorite blends.

Made with whole milk, the traditional way is not vegan. Also, some of the syrups may contain questionable ingredients. Still, there are ways of making a Starbucks Frapuccino vegan. Switching the milk to an alternative such as almond is a good start.

Stay clear of the syrups to be sure. You will be left with ice, Frappuccino roast coffee, milk alternative, and sweeteners such as stevia as an option.

If you are on the go, there are more vegan options from the brand. A Starbucks Frappuccino with Almond milk is available in stores. You’ll find vanilla and mocha flavors that have the stamp of approval from PETA. These vegan drinks are available in Target and Kroger among other stores.

According to the label, the vanilla version of this bottled drink is made of the following ingredients:

The only ingredient that would otherwise cause concern is sugar. A contentious subject in terms of being vegan, sugar can be processed with bone char made from animal bones. The particles don’t transfer into the food itself, but many vegans will avoid products where this method is used.

Since PETA has given the thumbs up to Starbucks Frappuccinos, it does make this seem less likely.

How Are Starbucks Frappuccinos Made?

The combination of all ingredients is put into a blender and mixed well until smooth and creamy. Then, they are poured over ice if ordered in a Starbucks. Typically, they are served with whipped cream and a squirt of some sort of sauce, depending on the blended frappuccino you have opted for.

Of course, the whipped cream is not going to be vegan, so avoid this if ordering in-store and change the milk for almond milk or a preferred alternative. A similar approach is used to make the bottled version, just don’t expect any ice.

Which Starbucks Frappuccinos Are Vegan?

The gold standard in all Frappuccinos, the caramel version has been a hit for as long as we can remember. The good news is that it is easy to make it vegan by substituting the milk for almond milk, soy, or coconut milk. Also, be sure to turn down the offer of whipped cream.

The caramel sauce topping also has to go but you are still left with a very delicious and very vegan Frappuccino.

This never used to be a vegan option since the strawberry sauce got its vibrant red color from Carmine, (or crushed beetles!). Since then they have replaced the ingredient with fruit and vegetable juice to still give it the vibrant red appearance whilst begging vegan.

Good news once you substitute the milk and whipped cream.

For fans of a stronger brew, this frap is a simple blend of any milk alternative with the regular frappuccino roast but it is given a bit of a boost.

It comes in the form of an espresso shot poured over the milky frap and it comes without whipped cream which is one less thing to worry about.

The two variants are mocha and vanilla. They both use almond milk and vegan ingredients that have caught the attention of PETA for all the right reasons.

Unless you ask for a milk alternative and no whipped cream, they are not dairy-free, and not vegan.

This is easily fixed with soy, coconut, or almond milk which is usually available in most of their establishments. There was a time where this drink would be off the menu, but not anymore.

Remember to check if the syrups used are vegan as not all of them are. Switch it up by ordering a different one if possible. Pick from the following vegan options:

The vegan-friendly options still depend on the country. It is always best to check with the barista before ordering to be sure.

Can Starbucks Frappuccinos Be Made Vegan?

Yes, they can, and it is easily done. With a couple of changes, the same taste and caffeine hit can be vegan.

Substitute the milk for a non-dairy alternative (most Starbucks coffee shops have plenty of options) and avoid whipped cream. Remember the list of syrups that are vegan and add a little sweetness to your frap to make it as tasty as the regular version.

Can You Get Frappuccino With Almond Milk?

Yes, you can. This isn’t just for the in-house version, they can now be purchased bottled from the likes of Target. The two flavors are mocha and vanilla.

For vegans nationwide, this is a step in the right direction and a tasty one at that.

Whilst the traditional method of making a Starbucks Frapuccino will always be unsuitable, there are vegan alternatives. Most baristas are prepared for changes to the menu so don’t be afraid to ask for frap the way you like it.

The bottled versions are becoming widely available, so no vegan has to go without their daily frappuccino.